Detect and Prevent Fraud, Data Leaks and Advanced Internal as well as External Attack for Cyber Infrastructure with Security Orchestration, Automation and Response

SOAR Vs. SIEM? What’s The Difference?

A lot of attention is being paid to the SOAR vs. SIEM debate. Although terms and acronyms can get convoluted in the ever-growing security marketplace, SIEM Security aren’t the same things. To get the most benefit from the security data, it is essential to understand the difference between these cybersecurity tools. SOAR and SIEM have various components in common, but enterprises can’t use these tools interchangeably as they are different.

The article will discuss the introduction of SIEM, and SOAR, some critical differences between them, how both can collectively provide multilayer cybersecurity to the organization seamlessly. 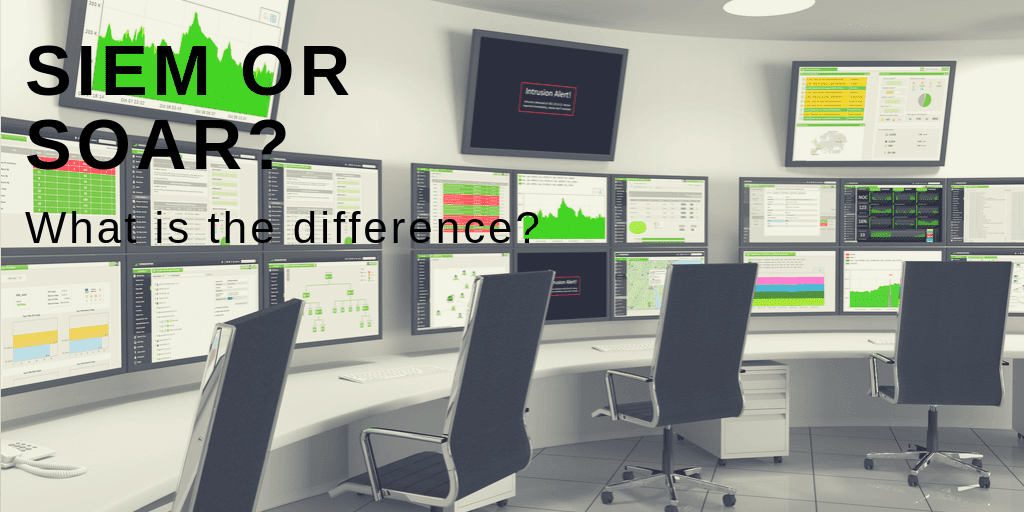 SIEM or Security Information and Event Management is a tool that provides two primary outcomes: reports and alerts. The report aggregates and displays security-related incidents and events- malicious activities or failed login attempts. An alert trigger when the tool analysis engine detects any violation against the set rule in the SIEM tool, signaling a security issue.

One of the most significant benefits of SIEM tools is improved identification and response time through data aggregation and normalization. They also speed up threat detection, security alerting, and meeting compliance requirements.

SOAR is an acronym for Security Orchestration Automation and Response. It is a new approach to security operations and incident response that improves security activities’ efficiency, rapidity, availability, and stability. SOAR tools combine all of an organization’s existing security tools and applications, allowing the security team to automate incident response workflows and shorten the time between breach discovery and resolution.

Orchestration, automation, and reaction are the three pillars of SOAR. Each pillar addresses different challenges that SecOps teams have, and together, SOAR tools provide a complete solution for the automation and orchestration of incident response and management tasks.

Data storage, threat intelligence, and analysis are the critical functions of SIEM solutions. They use data aggregation, threat detection, identification, and alert simultaneously, and these aren’t commonly automated operations because they result in repetitive duties. SIEM solutions only send out alerts when they detect suspicious activity, and security analysts then manually act to determine whether further investigation is necessary to declare the event as an incident.

On the other hand, SOAR tools automate the entire investigation process. They can certify an event as a security incident or non-security event.

One of the primary differences between SIEM and SOAR is the amount of human intervention required to operate each tool type. As the security teams need to maximize their value, SIEM tools require constant fine-tuning and development. Although SIEM tools are created to save time and effort, they often consume more time. These tools also require a designated team to manage and maintain rules, used cases to distinguish between real and false alerts. As a result, many SIEM administrators claim that the tools provide value; however, they invest increasing amounts of time and resources to see some actual results.

In contrast, SOAR tools can help reduce human intervention due to their automation feature as their primary object. As SOAR tools automatically filter out false positives, they generate fewer alerts, allowing security analysts to focus more on improving and automating incident response plans.

Both SIEM and SOAR use the same data: logs and events from all application and network components. However, they acquire data from a wide range of sources, and the amount of data they collect varies greatly.

Since SOAR is based on an automation philosophy, these tools have better knowledge about actions and configurations in the network to identify anomalies.

Should you use SIEM and SOAR together?

According to the security professional, SIEM and SOAR can work together to provide a collective defense against cyber attacks and threats. Gartner predicts that 15% of businesses with a security team larger than five people will leverage SOAR by the end of 2020. SOAR has the potential to improve the efficacy and efficiency of Security Operations; therefore, the platform plays an essential role in shaping the SIEM’s future.

SIEM raises alerts when malicious activity is found and notifies security administrators to respond to the alert or trigger an automated response. However, SIEM’s response capabilities go to the next level with the SOAR solution by offering an automated response. After receiving the alert from SIEM, a SOAR solution issues a call to generate a ticket in the incident tracking system. After that, it reaches into the emergency alerting system to inform the CSIRT team while implementing quarantine rules automatically in a firewall.

Although both SIEM and SOAR provide security teams with solutions to their problems, they can complement each other. Having a SOAR tool makes SIEM solutions more efficient, and together they produce more reliable and meaningful alerts that security teams can effectively respond to. The integration of SIEM tools with SOAR tools combines the power of each to create a more robust, efficient, and responsive security solution.

We use cookies to improve your experience on our site and to show you relevant content. By clicking “Accept All”, you consent to the use of ALL the cookies. However, you may visit "Cookie Settings" to provide a controlled consent.
Cookie SettingsAccept All
Manage consent

This website uses cookies to improve your experience while you navigate through the website. Out of these, the cookies that are categorized as necessary are stored on your browser as they are essential for the working of basic functionalities of the website. We also use third-party cookies that help us analyze and understand how you use this website. These cookies will be stored in your browser only with your consent. You also have the option to opt-out of these cookies. But opting out of some of these cookies may affect your browsing experience.
Necessary Always Enabled
Necessary cookies are absolutely essential for the website to function properly. These cookies ensure basic functionalities and security features of the website, anonymously.
Functional
Functional cookies help to perform certain functionalities like sharing the content of the website on social media platforms, collect feedbacks, and other third-party features.
Performance
Performance cookies are used to understand and analyze the key performance indexes of the website which helps in delivering a better user experience for the visitors.
Analytics
Analytical cookies are used to understand how visitors interact with the website. These cookies help provide information on metrics the number of visitors, bounce rate, traffic source, etc.
Advertisement
Advertisement cookies are used to provide visitors with relevant ads and marketing campaigns. These cookies track visitors across websites and collect information to provide customized ads.
Others
Other uncategorized cookies are those that are being analyzed and have not been classified into a category as yet.
SAVE & ACCEPT